I think that we need to take a step back just a smidgen. What do you think of when you see or hear the word, play? Come on, take a few seconds and really picture it. Picture a scene either from your own childhood or having seen other children engaged in play. Stay there for a second. Okay, now that you have an image in your mind, tell me, are you smiling in your thoughts at all? I definitely smiled. I noticed that when I allowed myself to be still in the thought of play, my mind took me back to various scenes of laughter, climbing, talking, and smiling. Specifically, I went to a scene of me playing with my niece and it evoked feelings of joy. We were simply having fun. So, the first mini knowledge bomb that I want to drop on you is that play is supposed to be fun and there is nothing wrong with having fun. When playing is no longer fun, then we typically call it something else, like work! Let me tell you, there’s no room for work in this post.

More than just being fun, play is truly vital to infant and early child development. It is a right of childhood that actually has been shown to increase language development, problem-solving abilities, creativity, social skills, emotional development and general intelligence.  The fact is, we learn better when we are having fun doing it. Play allows children to practice different life roles and start to understand the basics of more complicated relationships such as those that occur between friends, families, and even businesses. A childhood lived with little to no play, is a childhood to be mourned.

Mawule took us on a journey to a preschool playground scene. There, we learned the subtle way that young children can benefit from playful interactions with both skilled adults and typically developing peers. Children also benefit from play when they play individually or in self-selected small groups. Have you ever heard of the saying, “Perfect practice makes perfect?” If not, it basically means that when you practice something well, over and over again, eventually you will be able to perform that task flawlessly. A good example of this in action is for us to imagine a two-year-old child learning basic cause and effects. 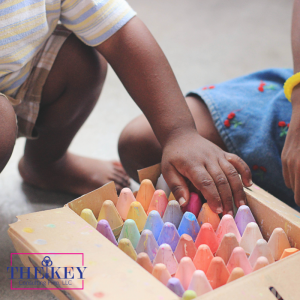 Let’s use De’Shaun as an example. De’Shaun is a 26-month-old typically developing Black child. He has been interested in a large green ball since he first laid eyes on it when he entered the waiting room his doctor’s office. He picks up the large ball and playfully throws it towards the wall in front of him while his father is talking to the receptionist. However, something mysterious happens. De’Shaun is confused when he no longer sees the green ball. He cannot figure out where it went. He begins to look around and finds the ball on the other side of the room behind him. De’Shaun smiles with delight when he sees the ball and, in typical two-year-old fashion, he runs towards the ball almost falling several times along the way. Once he reaches the ball, he again tries to throw it in front of him. Just as you might imagine, the same scenario is repeated, the ball lands behind him. De’Shaun is thoroughly confused and keeps trying to get the ball to go in the direction that he throws it. He smiles and laughs each time he locates the ball and wants to continue playing.  De’Shaun slowly starts trying different subtle strategies to get the ball to go forward, like trying to throw it harder, bending his knees more, etc. Aha! A close observer would notice that De’Shaun is learning that his original technique for throwing the ball was not as effective as he had hoped. He is practicing how to make the ball do what he wants it to do without any formal adult instruction. To the untrained eye, De’Shaun is just playing. But to you and me, De’Shaun is learning, practicing, and having fun. For all we know, De’Shaun will later be able to use these problem-solving skills to change the world.

Through this post and Mawule’s post about the use of play on social and emotional development. We have seen two examples of how play is a natural part of child development. Next, we will explore how play can be used as a therapeutic intervention. Stay tuned to learn a little about Play Therapy.

Just remember, “Play is a child’s ultimate practice for life.”